5 Business Lessons from Riding a Motorcycle in Nairobi 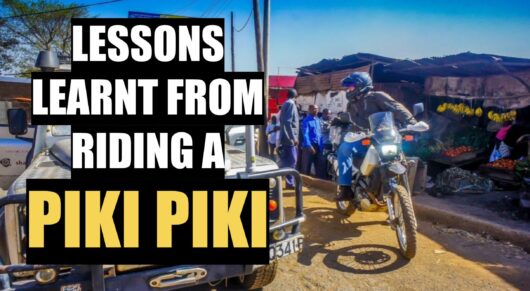 I got my first motorcycle when I was 16 and started to ride the streets of Nairobi.  Fortunately, we had fewer cars on the road back in the early ‘90s. I started to understand the way to see and think when dealing with the odd assortment of experiences you face on Kenyan streets.  Today, I still ride my piki piki (“motorcycle” in Kiswahili) to work each day, and I’ve also been fortunate enough to take it to some far flung parts of the continent. During my daily commute, I started thinking about the business lessons I’ve learned from riding my motorcycle in Nairobi.  Each week, I talk to the 100-person strong BRCK team and decided I wanted to share these lessons with them. Here they are. 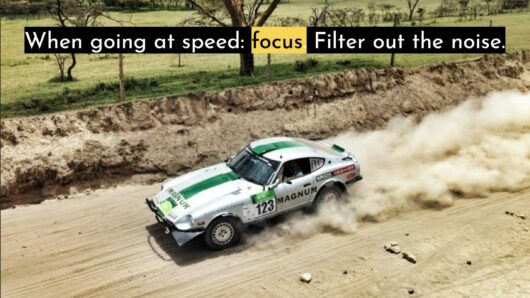 1. When going at speed, focus. Filter out everything else.

This, like many of the lessons, are not just for Nairobi rides but for everyone who is on a bike.  The first point here is to stay hyper-focused, and not let your mind wander.  The second is to learn to “see” everything so that you have situational awareness, but only watch what’s important.   The business analogy is the same. When we’re really hitting our stride, or when things are moving faster than we can control (hello Coronavirus), then it’s incredibly important for me to know what I’m focusing on and not to try to do everything.  The same holds true for every person in the company; have a tight understanding of what you need to spend your time on so that we don’t waste energy, resources, and time on things that aren’t going to move the needle for the business. 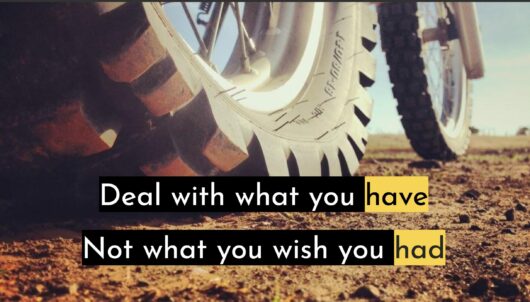 2. Deal with what you have, not what you wish you had.

I remember riding down one of Nairobi’s new bypasses - two lanes each way, with a divider in the middle - going around a long corner and finding a car driving the wrong way down the road directly towards me.  This isn’t abnormal. Shoot, I’ve got stories of U-turns on three-lane highways, pedestrians doing odd things, cows suddenly appearing (or camels, or sheep, or goats - you get the idea).  It’s part of what you have to learn to deal with.  Running a company is much the same.  You’re pleasantly building your platform, doing sales or marketing, talking to investors, creating a solution for your primary user, and then something happens that you’re not expecting.  I happened to be in San Francisco when the US banned travel from Europe. I was on my way to another tech CEO’s house for dinner.  When I arrived, we looked at each other and stated that raising capital just got 100% harder than it had been just a few minutes before.  You still have to find the capital to grow your company, but now you have to do it in a different way.  The truck hurtling down the road in the opposite direction just waylaid your plans. You either bail and find yourself in a ditch by the side of the road, or you swerve and find a new path, madly holding on to the handlebars and keeping the bike upright. 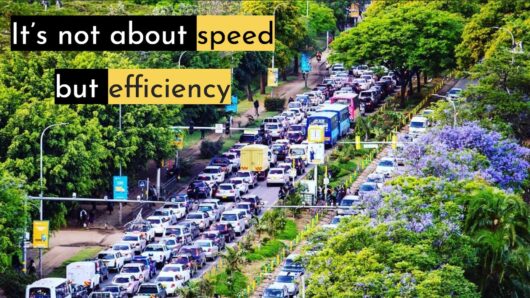 3. It’s not about speed, but efficiency.

When people see you riding a motorcycle in Nairobi they think you’re driving fast. Sometimes you do when on the big highways, but mostly you’re just putt-putting along in first gear as everyone else is stuck in standstill traffic.  Riding a motorcycle in Kenya isn’t about speed, that’s what gets you in trouble (revisit my last point to see why), it’s about efficiency of consistent movement.  When everyone else is stopped, I can keep going.  My commute each day in a car would be approximately one hour each way, on a motorcycle it’s 20 minutes.  There are times running a company where you are in a speed moment. We’ll find an opportunity with our customers that we need to act on now to clinch a win.  That’s great, and when those happen we have to sprint to get there.  No company can survive doing that all the time, though. So instead, we design for efficiency - for making sure we have constant forward movement and not being bothered that we can’t go fast all of the time.  I think about how we rolled out our Moja Network across Kenya’s public transportation system over the last two years.  The first few months, when things were on a tight deadline and we were dealing with all kinds of issues, it was an all-hands-on-deck sprint.  Then we were able to gear down, continue growing the network, put in standard operating procedures, and build processes.  This network team today does an amazing job of being efficient and effective without tiring themselves out in a constant speed battle. 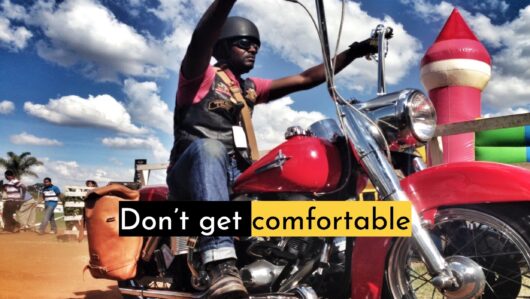 I remember jumping onto my motorcycle, and taking a friend for a lift down Ngong Road just outside my office.  One lane wasn’t moving at all, and the other oncoming lane was completely empty (back when it was just two single lanes).  As we’re moving along slowly passing a bus, a guy blindly walks out in front of the bus directly into our path.  I slam the breaks and swerve away from him.  He double-takes, his eyes get as big as saucers, and he jumps forward…!  By this time I’m riding forward up onto my tank as I hit the brakes hard, and my passenger is shoving me forward too. The pedestrian smacks my handlebars and my wheel goes sideways - the bike leans over and drops (my passenger and I were on our feet and didn’t go down with it) - then the pedestrian leaps up and sprints away.  Nothing broken on the bike or person, but we’d just gone from comfortable to shock in about two seconds. At BRCK we created the Kio Kit, which I still think is the best and most holistic solution for bringing digital education to places that have never had it.  It was truly innovative and we were happy and comfortable with just how good it was.  While we basked in that, we crashed into the slow turnaround time for decisions in the education sector.  We had this great product, but the sales funnel was so long, and the cost of holding inventory was so high, that we just couldn’t make it work.  After two years of pushing it, and getting independent longitudinal studies of how it improved learning outcomes, we had to put the Kio Kit aside and focus on something else. 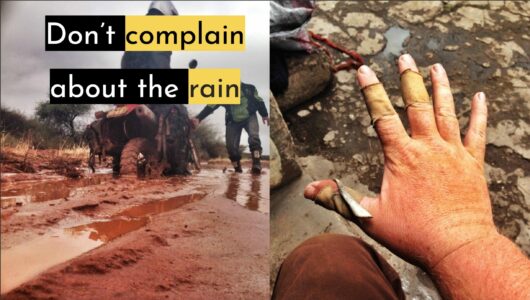 5. You can’t complain about the rain.

This is a short and simple one.  If you buy a motorcycle, you know it will rain and you’ll get wet.  Don’t buy a motorcycle and then complain when it rains, like it’s some great surprise to you.  In business we know there are going to be things that are uncomfortable to deal with.  You’ll have to fire people.  A new feature won’t quite do what you thought it would do.  A partner lets you down, or a company you relied on just isn’t there any longer.  This is business, this is entrepreneurship.  Don’t complain about it, you know it will happen. Instead, get to work and find a way to deal with it.  However, like a motorcycle in the rain, you can plan.  Get insurance, save cash for that rainy day - in other words, carry your company's equivalent of a rain jacket.    These lessons from riding a motorcycle often came to mind during my commute. I kept forgetting them by the time I reached my destination, so I  soon found myself pulling over onto the side of the road to scribble them down. As an innovator and an entrepreneur, things can feel uncertain even in the most ordinary seasons. It's important to make sure we remember what we've learned along the way.