Some puddles along the way[/caption] We started out early from Kurungu towards Baragoi, we didn't have any issues with bandits as there was an increased police presence in the area. It had rained the night before, so the ground for our whole trip was a bit damp, perfect for fast riding. It also created some very waterlogged areas, where we had to get completely soaked up to our waists in the water as we rode through.

Taylor Martyn riding through a deep puddle, north of Maralal, Kenya from WhiteAfrican on Vimeo.

Until we got to the rocks near Maralal, it was a fairly easy ride, then things began to toughen up. One puncture on Taylor's bike, a quick change, and then off on our way again put us into a rainy Maralal by lunchtime. [caption id="attachment_166" align="alignnone" ]

The views from 30km north of Maralal, one of the most stunning views in Kenya[/caption] We went through some massive puddles along the way, so our boots were completely soaked and we were then able to empty the water from them as we enjoyed some hot chai, chapatis and stew at a local hoteli. [caption id="attachment_168" align="alignnone" ] 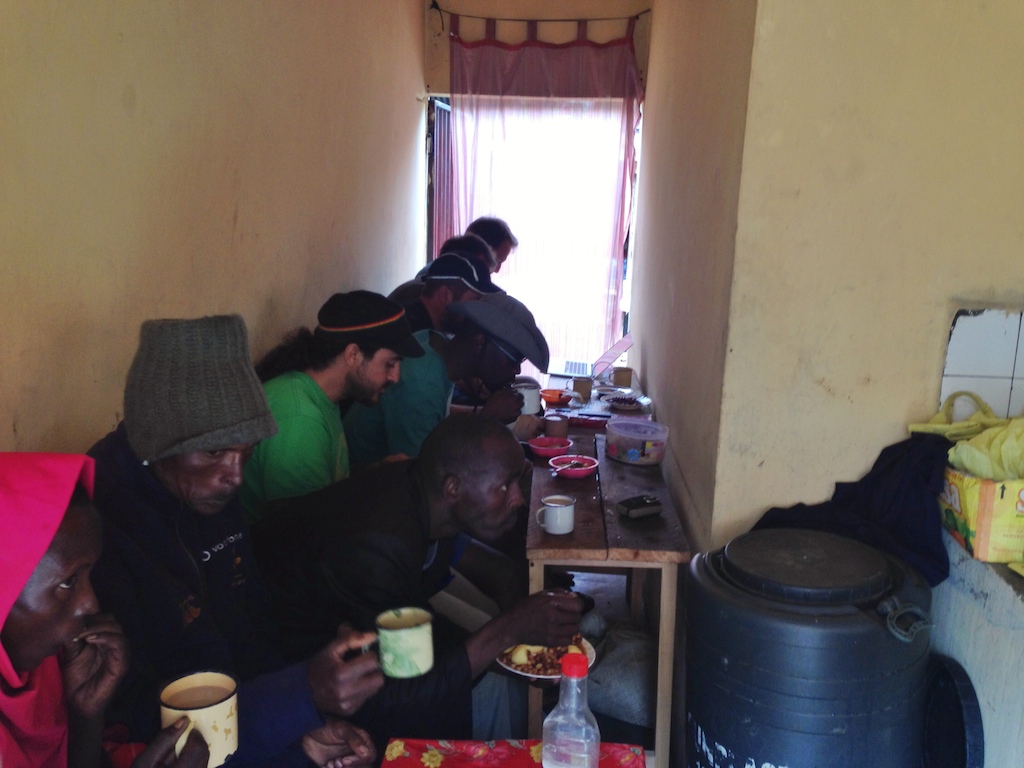 Hot chai, chapati and stew for lunch in Maralal[/caption] Back into our wet socks and waterlogged boots, and we were off for some rocky, wet and slippery riding down towards Rumuruti - where the tarmac roads begin. From there it was a quick run down to Gilgil, which we reached by 6:30pm and started for Nairobi, only 1:30 ours away (or so we thought...). Now, due to the number of spills the bike that I was riding had endured, none of the lights worked, except for the headlight and the right blinker. We put Taylor's fully functioning bike in front, me in the middle, and the Land Rover behind. The car alternator had gone out the night before, so we didn't run the car with much electronics all day and the battery seemed to be holding up well. 20 minutes later, just past Naivasha, my headlight went out. Now, the only place more dangerous than driving on a road in Kenya at night, is the side of the road. But, there we merrily sat, Philip and Reg testing out the electronics and finally realizing that the bulb itself was burnt out. I wondered what a flashlight would look like inside the headlight casing. It turned out to be surprisingly bright, so Fady donated his super expensive and very bright bicycling flashlight to the cause, which turned out to fit perfectly. [caption id="attachment_165" align="alignnone" ] 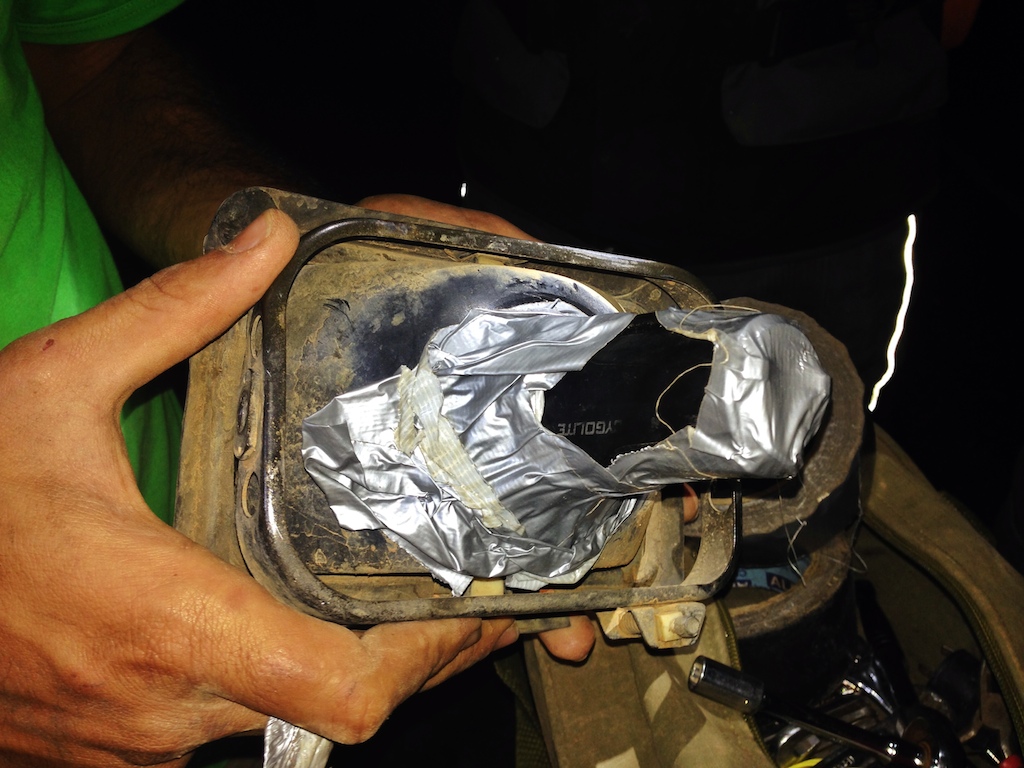 Flashlight + Headlight housing = new motorcycle headlight[/caption] As we duct taped that jua kali light into place, the Land Rover's batter gave out it's final death call and the lights went out. No problem, we put it in reverse and pushed it back down the hill to jump start it. Fortunately, we had a 12,000 mAh Brunton Solo 15 solar charged battery on hand (similar to their new Impel), and we hooked that up to the vehicles lights. Off we rode into the night, now the truck in front, me on my raggedy old cludged together light bike in the middle, and Taylor riding anchor. It was now very cold, as it gets in the Kenyan highlands during the rains. Then, as we got up towards the top of the escarpment, at the 8,000 feet high level, it started to seriously rain. Now, it's already hard to see at night on a bike with a headlight pointing up and blinding pilots, with people's brights deflecting off of the droplets on your visor it becomes even harder. Pop up the visor and you can see again, but the cold and stinging rain now hits you in the face. Better to live with a little pain than die in a collision, so up it went. We had just passed the Kijabe turnoff when the Land Rover's second battery died. Fortunately, we were in my territory, as my alma mater RVA was 15 minutes down in Kijabe. We pulled over at a petrol station, called up my old dorm parent Mark Kinzer, and he found a friend who was willing to donate us a fully charged 12v battery for the remainder of the trip. 20 minutes later we had a battery and were moving down the road again. 16 hours after leaving Kurungu, wet, cold and utterly fatigued, we arrived home and well in Nairobi. Thank god for old friends, good (enough) roads, no bandits and safety through the night drive. A bunch of creative problem solving was needed to get through, as well as stamina and perseverance in the face of the friction that is thrown at you on a trip like this. I can't tell you how happy I was to get some warm food at home, a warm shower to thaw out my body, and a warm bed to crash collapse into as I went comatose for the night. Would I do this trip again? Absolutely. In fact, "BRCK Expeditions" are a new thing for us that we'll continue to do as a company and that we'll look forward to hearing about from our BRCK users around the world. I wrote up another blog post on my personal blog today about some of the things I learned about our team. They are: