BRCK Eclipse trip day 4 – Setting up for the eclipse 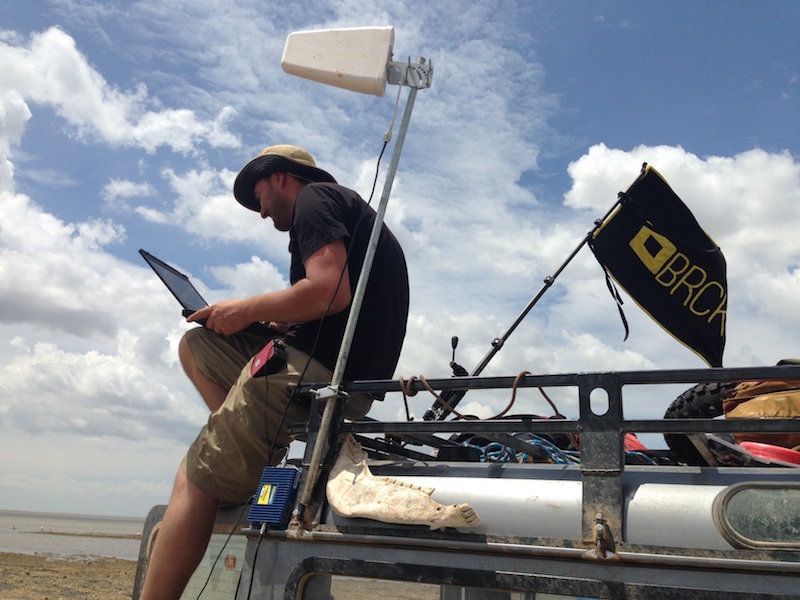 Setting up the Wilson amplification antenna, with the BRCK flag flying behind[/caption] 6am rolled around and we all jumped up, hungry, but rested. Sunrise was amazing. A beautiful color that shed some light on where we actually were. As I type this, there is a warthog about 20m away to my left, while both greater and lesser flamingos, along with some kind of wild goose, feed 20m away in front in Lake Turkana. Sibiloi is distant and harsh. It’s a forgotten mixture of austere beauty, heat, wind and silence - that though it isn’t welcoming, is still a joy to be at. I can think of no reason why 200-300 people would come here, except for the rare hybrid eclipse that we’re about to see tonight. We swore we had driven through trees, but there were none around, not within 10 miles. This should be an object lesson in the illusions that one sees when riding and driving after so many hours on the road at night. It also became apparent that we’d have to lose any sense of privacy when it came time to find a restroom. It’s a good thing that this is not a mixed group. :) All morning we’ve been working on getting a couple things tested: 1. Internet, we’ve got a BGAN terminal for satellite data connectivity provided to us by Indigo Telecom in Nairobi. They rent them out to people everywhere in the region, and have been great to work with. That’s working nicely, and hopefully we’ll get the eclipse livestreamed at brk.com/eclipse. 2. Mobile phone signal, Wilson has provided us with some long range amplification antennas. We tested them in Kurungu, where we turned a weak Edge signal from Safaricom that couldn’t transmit any data into a very strong Edge connection that was usable. They gave us a couple to test out, and we’ll do so again on the road back to Loiyangalane, from the a hill about 20-30km away. We don’t have a good line of sight from where we are to the tower in Loiyangalane from Sibiloi, so can’t get a signal here. [caption id="attachment_133" align="alignnone" ] 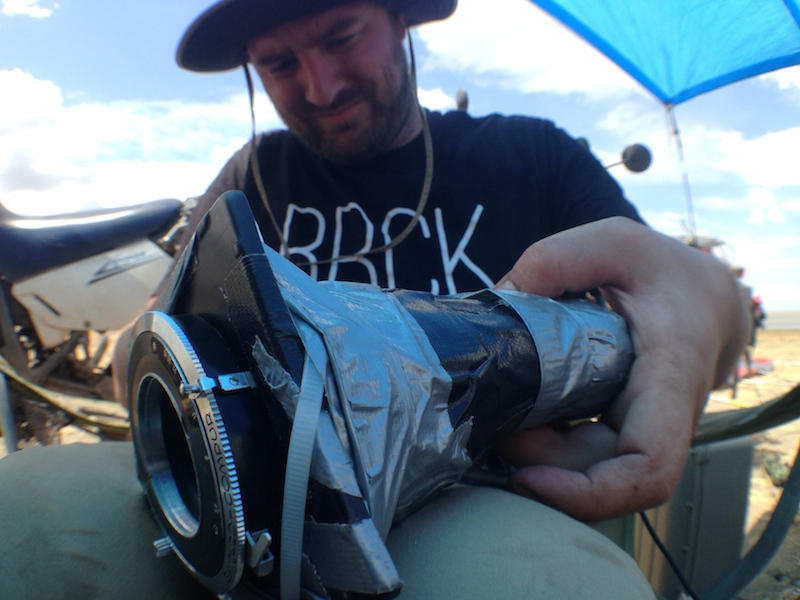 Reg helps build our eclipse camera[/caption] 3. Camera setup for the Eclipse. What we’ll be streaming with is a Frankenstein-like beast, that’s cobbled together from a web cam, toilet paper roll and a Schneider large format lens, all held together by gaffer tape. It’s really amazing, the fact that the team has such a mix of camera and digital know-how to pull this off by Jon and Philip, was great to watch. 4. Power for the computers and BGAN. There’s a lot of “hack it together” knowledge on the team, and between Reg and Philip they were able to jimmy rig some solar to car battery to inverter to hacked together power plug. some people will tell you that this is “real field constructed power distribution” - we all know it’s a jua kali rig job. While all that is being set up, it’s great to see the BRCKs humming along quite nicely. The BRCK flag now waves above the Land Rover at Camp Jawbone (named after the zebra jawbone we found when setting up camp last night). Now we’re waiting for 5pm to get the livestream rolling. Crossing our fingers now for a cloudless sky tonight. Update: It’s 5 minutes to the eclipse, we just had a massive sand storm and rain storm pass through. barely getting connection and a lot of clouds. Probably can’t stream, so will try to upload images.