Kiltamany is composed of 10 villages surrounding the Samburu National Park. They are far away from the city, in some kind of deserted landscape, with no piped water and no electricity. Kiltamany Primary School is the only school for the whole community, with around 200 students, scarce chalk and studying materials. Sylvester, a Samburu Junaenda (in his 30s) believes the school is the hope to Samburu people live their lives better, change the way the community think about marrying early age girls and their practice of genital mutilation. In all, offer future generation broader possibilities.

In the Expedition BRCK Team came to Samburu, it was a week of a thousand learnings. I was there just for the last 3 days, and it was already special: feet on the ground, thoughts on the rising possibilities, hope for the future, hands-on, lots of work to be done. For the three days I was in Kiltamany, there were only 3 out of the 7 teachers present. The School has 8 classes, meaning that on a normal day there is always one class without teacher, and during our time there 5 of the classrooms had no teacher. In spite this, children came every day and were seated in their desks, eager to learn something. Some of them reading or writing, or just doing nothing, until the bell for break ring. 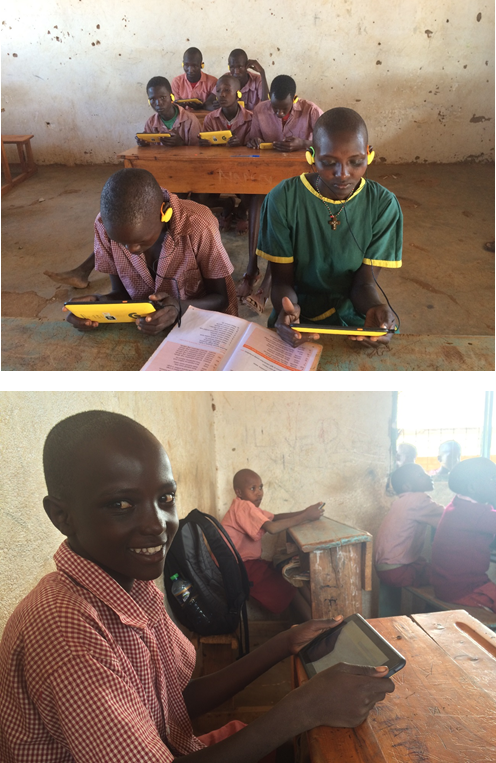 This gave our BRCK team an extra job as we were taking turns to be teachers. It was good in one sense, as it put us in the shoes of the teachers (not exactly of course, as I do not have the training nor the content nor speak their languages). I felt the difference of giving one class with the kids holding the Kio Tablets, and another class with no such resources. On the other hand, it was not ideal, as it was important to see how the teachers behave with the tablets, if they find it useful, handy, and simple and if it helps in class. Gordon, from eLimu, was showing the kids their new Swahili literacy app, Hadithi! Hadithi!. Bobo, the app character, was created to do a lot of success among the kids. He tells them story, ask them questions, say enthusiastically his Well done!!!  The kids, on the other side, were sited on their desks trying very curiously to get near Bobo, as he was in Gordon's laptop (as the app is still not in the tablets).  They were very excited to participate. Each time one kid went to interact with the screen was the most amazing part. There was a suspense in the air about knowing what response Bobo would give. 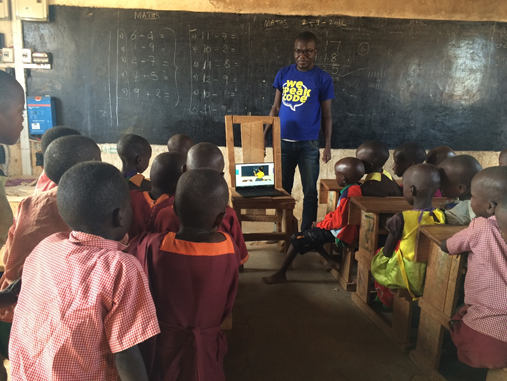 I went to teach in Class 4 without the tablets and it was a hard job. First my absence of Swahili and the kids' English. I used a lot of body language and made them come to the board to draw some animals they could see around. They drew lions, sheep, goats, elephants, cows, camels, and snakes. Then, I moved to the body parts vocabulary: heads, shoulders knees and toes. They showed to me that they were learning, and that they knew all the words. However, when I asked some other types of questions, the only possible answer could be YES! YES! YES! They didn’t want to get me sad.

When in class 5, now with the Tablets, it was was amazingly simpler. In this class, the children were calling me all the time to teach them something, and they were really excited to get a mzungu teacher. Their English was a lot better so I decided to read with them some English Story Books from the app. Each of them read one paragraph, just as I did in school. I made some questions about the story and asked them to draw what they remembered. What I saw the teachers normally doing, is ask the students to repeat the words in the story. They can do this well. That’s the way the teachers usually gets feedback if the kids are learning or not. It’s definitely a harder job to check their comprehension of what was said or read, or if they can put it in other words, but to develop this skill is the first step to build a critical mind. I suppose once there is this feature on the app, with proposed questions for each exercise, or the possibility of the teacher to develop their own questions, students will learn better and teacher will find their job easier. During this expedition, I realized something I already knew but wanted some proof. The impact the Kio Kits are bringing to this community is hard to be measured, but is huge. All the content inside one small tablet, the opening of possibilities in the children’s minds, interactivity, learning by playing games, curiosity, all this with no connectivity needed. Each time, we are learn of our capability to improve society. 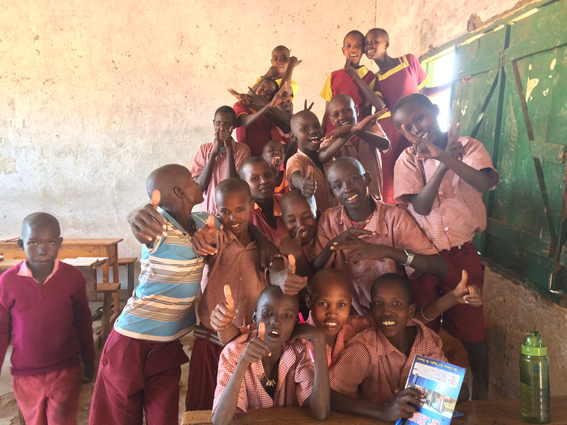