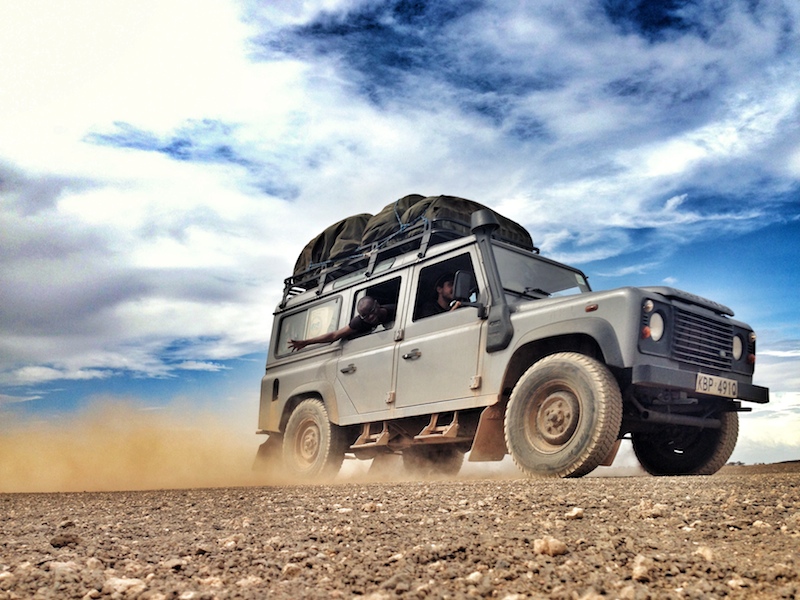 Day 3 started a little late as we had to fix Taylor’s front forks, which had met with an untimely collision with some mud and sand the day before. He rode about 100 kilometers on a skewed front tire, which just made the sand at night a bit harder, so it was a miracle that he didn’t go over again. After an amazing breakfast from the Swanepoels, we made great time on smooth roads from Kurungu to Loiyangalane, this day resolved to stop and eat lunch, refill the water and relax for 30 minutes before we did the last run to Sibiloi. Now, the road to Sibiloi has always been an adventure, and it didn’t disappoint us… It’s about 125km from Loiyangalane to Sibiloi, and it’s full of massive boulders, though those had been cleared and a beautiful road put up the incline of the escarpment. Again, we made good time for the first half of it. Then, Philip took a bit of a tumble on the open sand flats. There’s a real tricky bit of riding where the sand becomes talcum under you with little warning. He hit a patch and as he went down hit his hand on a rock. A bit of blunt trauma treatment later it was decided that he couldn’t ride any longer. This left us in a bit of a bind as no others in the vehicle knew how to ride a motorcycle. We were about to hoise the large Honda 650 XLR onto a passing Kenya Wildlife Services vehicle. Right before we lifted it, Fady decided he’d give it a try… Fady is some kind of superman. He learned to ride a motorcycle on the sand flats at 5:30pm and rode for the next 3 hours into the night through the African bush. It was quite amazing really, I’ve never witnessed anything like this before, and know that I could never have done the same. Your first 3 hours EVER of riding a motorcycle are done in some of the harshest terrain - at NIGHT!? Needless to say, we’ll be providing Fady with a certificate of excellence. (special note from Fady: “Smurfy don’t kill me”) We were the final vehicles into Sibiloi National Park last night. It was about 8:30pm and we were completely exhausted. Now, you’re normally not allowed to bring motorcycles into any national park in Kenya. However, this time the warden made an exception, as long we agreed to ride straight to the camp and not ride them again until we left. I can’t tell you how good that made all of us feel and we owe the KWS a huge note of thanks for taking so much good care of us last night. In particular, a gentleman by the name of Sode was exceptional and I just wish all government employees were as pleasant and helpful. Once past the gate, we drove down a road until we literally drove into Lake Turkana. After we backed out of the water, the KWS guys showed up again, along with Andrew Nightengale - someone I know from staying at his farm with my family a few years ago. He pointed us towards a place right along the lake a few hundred meters away. Once again, exhausted at the end of another African bush night drive, after a full day on the road, we set up our tents. A few bowls of my wife’s chili later (promptly announced as the “best food ever” by everyone), with some Dickel Bourbon whiskey as a chaser, we collapsed into our tents and slept like the dead.