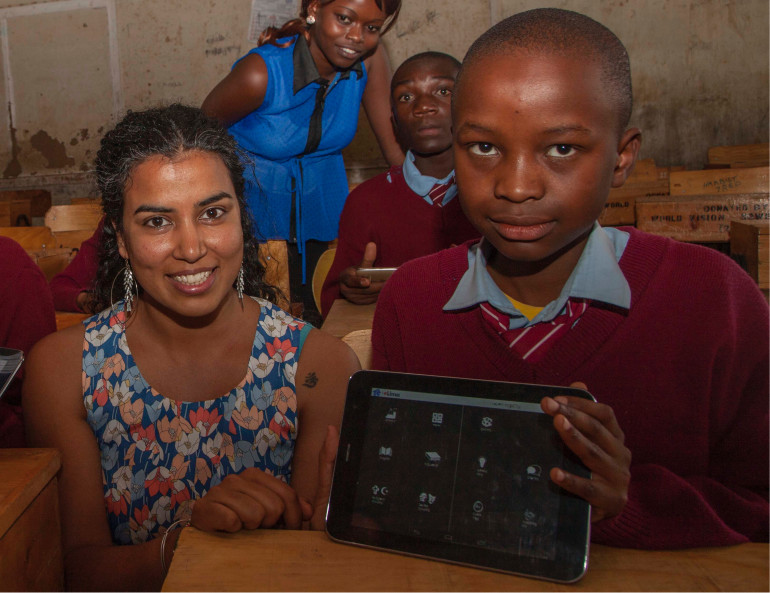 There's a press release (which always seem boring to me, but have added it to the bottom of the page) about Nivi Mukherjee, the founder of eLimu and long-time iHub member, joining the BRCK team offically. I've had the pleasure of seeing her grow her company from nothing, getting out ahead of the curve to create a new way to learn, study and test for the big KCPE exam that every kid in Kenya takes in 8th grade. She's fought and shown the scrappy leader that she is for 4 years, so when we started looking at BRCK Education more seriously six months ago, Nivi was the one I went to for help. While we know a lot about tech and hardware, she knows a lot about education, teachers and students. She also taught us new fancy words, such as "pedagogy". The past 4 months have seen us working closely together with the eLimu team on some great projects, and without her understanding of how the education system works we wouldn't be where we are today. Nivi is now the President of BRCK Education, a new business unit for us that focuses school-based solutions where the BRCK software and hardware can be used to make a real difference. We've seen this happening in Uganda, Tanzania and Kenya as more schools get started with tablets and computers. Nivi's job will be to fulfill on this in our own backyard here in Kenya, and also to take it to the rest of Africa and the world. More news on this front soon...!

BRCK appoints its Education President Nairobi, 4 August 2015 – BRCK, a local hardware and services technology company based in Nairobi, has announced the appointment of Nivi Mukherjee as the head of its newly created division, BRCK Education. Ms Mukherjee will be charged with driving BRCK’s efforts to provide hardware and software solutions to enable online and offline learning. Commenting on the appointment, BRCK Board Member and Ushahidi Executive Director Juliana Rotich said: “We are delighted to welcome onboard Ms Mukherjee who has a wealth of knowledge and expertise to take over the Education division. Through this division, we aim to creatively and effectively deliver 21st century technology that will revolutionize the education sector and eventually take digital literacy in Kenya and in the African continent to the next level.” Ms Mukherjee joins BRCK from eLimu, one of the most talked about EdTech innovations in Africa where she spearheaded the digitization of KCPE curriculum content for Kenyan upper primary students and the development of a literacy application in English and Kiswahili. The new president is expected to leverage the BRCK, a pioneering connectivity device that is designed to work in environments where electricity and internet connections are problematic. The BRCK is a WiFi access point with an 8-hour battery-life and the ability to store up to 2 terabytes of educational content. “I am excited to join this great team that has demonstrated its ability to innovate effectively for Africa. I am privileged to be able to leverage this game-changing device, which will enable instantaneous access for up to 40 devices, to promote digital access in education. What remains now is to curate localized and culturally relevant digital content that will improve the learning experience and outcomes for millions of students on the continent,” Ms Mukherjee said. She reinforced BRCK’s user-driven commitment towards developing sustainable and interactive tools adding that the organization is keen and ready to partner with teachers, parents, students, like-minded organisations and government institutions in order to bring far-reaching changes in the way education is delivered. Notes to Editors About Nivi Mukherjee Nivi is a social entrepreneur, technophile, community volunteer and 2014 East African Acumen Fellow. She is passionate about educational initiatives that foster development and fun. She has spoken as an expert on eLearning, the African tech scene and innovation at: TEDxStellenbosch, South By South West - Austin TX, Massachusetts Institute of Technology (MIT) Sloan Business Conference Africa Innovate as well as appearing on Al Jazeera, CNN, Euronews and being featured on BBC and The Economist. In her spare time, Nivi organizes cultural festivals, bakes, knits, runs half marathons, folds origami and plays Fusball. About BRCK BRCK is a connectivity device designed in Kenya to meet the demanding challenges of life and work in harsh environments where electricity is intermittent and the internet is spotty. BRCK works to alleviate these issues by delivering a redundant data connection combined with a reliable power source to ensure that nothing gets in the way of getting the information you need. BRCK can support up to 40 devices, has an 8-hour battery life when the power is out, and can jump from Ethernet, to WiFi, to 3G, to 4G seamlessly. BRCK is the first company to pursue and deliver using entirely ground up design and engineering of consumer electronics in East Africa. The initial BRCK units started shipping in July of 2014 and by February of 2015, thousands of BRCKs had been sold in 54 countries around the world, in both developed and developing markets. The company is a spin-off from the world acclaimed Ushahidi, a Kenyan technology company which builds open source software tools and which has received accolades for the impact that its creative and cutting-edge solutions are having around the world.

2 responses to “BRCK Education: Nivi Mukherjee to Lead the Team”