Eclipse Trip Days 5 & 6 – Many roads and no progress

Yesterday we took off from Sibiloi towards Loiyangalani and then on towards South Horr. Besides a tire puncture along the way for the car, it was nice and easy. We were able to stop and talk about the eclipse with a few eclipse chasers from Spain and they said they got a somewhat clear picture of it, with just a small bit of cloud cover. There were so many vehicles leaving the north, that big clouds of dust covered us and made us look like brown powdered humans. While stopped on the side of the road, about 100 Kilometers from Loiyangalani we could get a very weak Edge mobile phone signal. Enough to send some tweets and call people, but no real media uploads. We spent some time with the Wilson amplification antennas, but didn’t have too much luck because we didn’t know the exact location of the tower from where we were. It’s a great piece of equipment though, one we love to break out and use with the Yaggi antenna from the top of the Land Rover. Fady got his second motorcycle riding lesson. Again, on some of the worst roads that Africa can throw at you… amazing really. He did it all with speed and grace, and just a single tip-over. We overnighted at the Swanepoels again, where we talked about the route possibilities. Massive rains have cut off a lot of the roads. Our 3 choices were: Marsabit (safe, long), Korr (not possible due to rains) and Baragoi (security issues, but short). We were heavily cautioned about Baragoi and Maralal, so opted for Marsabit and set off at 5:30am. Today’s trip started off with eating a lot of flying ants. They flew so thick as we rode that it was like riding in a snow storm, except with wings. I got the all in my goggles and helmet, light and other gear. Everyone was covered in flying ants when we stopped 30 minutes later. [caption id="attachment_151" align="alignnone" ] 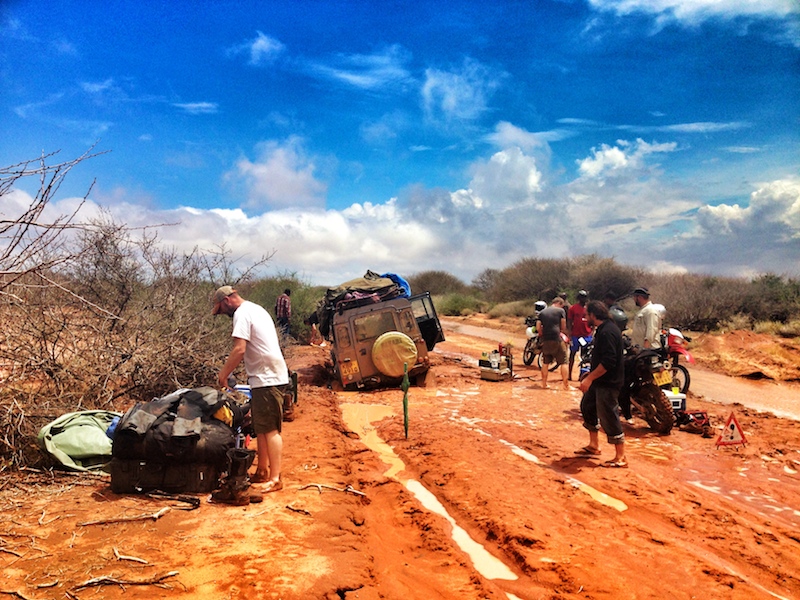 The Land Rover, stuck on the road between Gatab and Kargi[/caption] 2 hours later found us sitting by the side of the road wondering how we were going to unstick a very stuck Land Rover. We had slipped and slid our way through, and Fady earned his “wet” riding badge with honors. 4-hours later, we were still stuck, after trying every trick we knew. I even tried something very stupid, and paid for it, trying to pull with my Suzuki DR650 and burning out the clutch plate. Now my motorcycle isn’t running and I have to leave it in South Horr with my friend to get it back down to Nairobi in a few weeks. This, I’m not happy about, but I should have thought through what I was trying to do. [caption id="attachment_150" align="alignnone" ] 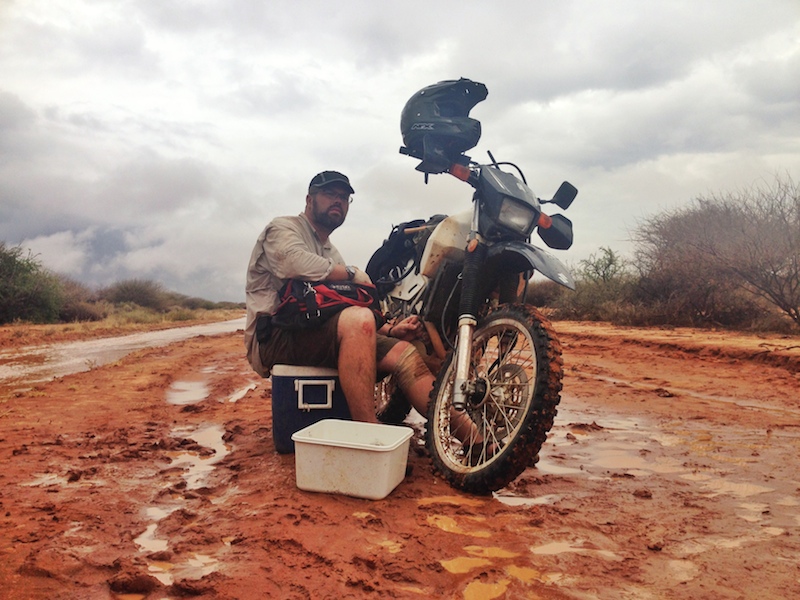 Philip working out that my clutch is busted[/caption] A Landcruiser came through in a few hours and helped pull us out. 2 riders and 2 motorcycles sat by the side of the road while the others tried to push through. However, a new lake had formed on the way to Kargi and Marsabit, so they turned around and came back. A Land Rover had showed up, and we hired him to take my motorcycle back to South Horr. [caption id="attachment_152" align="alignnone" ]

Back at the Swanepoels in Kurungu, or as we like to call it BRCK HQ North[/caption] So, now we sit in the same place that we sat yesterday at the same time. Tomorrow we shoot off towards Baragoi. Though there have been bandits on the road, we’ve heard from another friend who went that way today that there is a lot of extra security on it and that they’ve just graded the road. With a lot of luck, we can make it to Naivasha and onto Nairobi by tomorrow night.