I love BRCK Expeditions! I love the intensity, the camaraderie, and - above all - I love the adventure. You never know what is going to happen on a BRCK Expedition and that is what makes them so great. It’s been a couple years since my last BRCK Expedition, which was our overland journey to South Africa. As a company we’ve spent this time being heads down working on building a business model for giving away internet access for free. It’s a platform we call Moja (which means 'one' in Kiswahili). Built on the foundation of our amazing new SupaBRCK, this infrastructure platform brings connectivity to the most remote places and provides an economic model for users who otherwise couldn’t afford connectivity access to the full internet - and a bunch of great content as well. 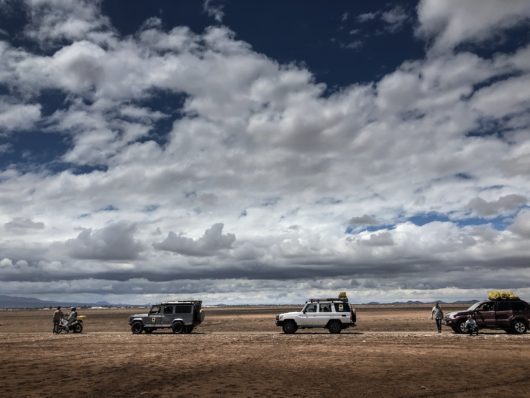 The Pemba crew heading along the Tanzanian border For Expedition Pemba, we decided to travel from Nairobi to the northern island of Zanzibar to deploy some Mojas and do some IoT testing. Our Director of Operations, Reid, spent many years on Pemba and he knows the people and community well. This expedition will involve our usual collection of vehicles and a lengthy dhow ride (a Swahili boat) to the island. It’s only a 10-day trip and we were all feeling it might be just a little too “easy”. Early in the planning stage, Erik received a call from a TV producer named Craig Martin. Craig and his co-host Earl Bridges both grew up in Thailand and now they travel the world capturing the stories of people endeavoring to do good in the world for their program called Good All Over (goodallover.tv). We all watched the trailer and thought that it would be fun to have a couple of TCK’s (third-culture kids, like some of us) join us with their cameras. We put out the call to the BRCK team for volunteers and quickly had a crew of 10 ready for adventure. When we were about two months out from the trip, Craig casually mentioned that they were bringing an entire film crew with them who would need to join us at every step along the way. We went from 10 to 18 people overnight. Our Pemba Expedition suddenly was no longer going to be easy. 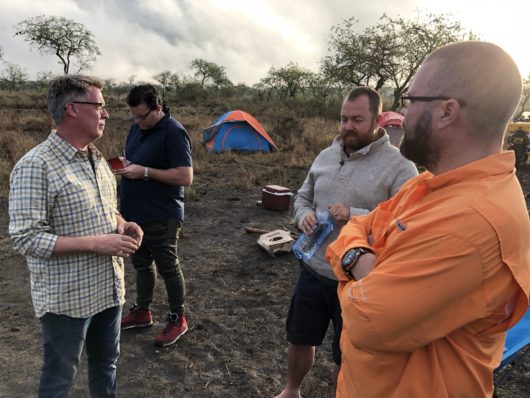 The hosts of Good All Over with Reid and Philip This is my fourth expedition and I have ridden a different motorcycle each time. This year, I am on my KTM Adventure 990. A revered adventure bike with off-road credibility. While the bike is extremely capable, it is also very heavy. Everything was going well on our first day of riding along the Tanzanian border heading towards the ranger station where we were going to setup a Moja unit. As we headed into the Chyulu Hills for the last 30km, the rain we had been nervously watching on the horizon started to fall on us. Fortunately, the direct rain was light but the effects on the road ahead were considerable. As we pushed our way through the volcanic soil and rocks, the track grew more and more slick. I laid the big bike down in a pocket of volcanic dust and fortunately jumped off before it hit the ground. Erik helped me right it and we headed off again. Not 1km further down the road, the rut that I was riding in pushed me into a mound of dirt. The heavy bike fell sideways against my leg and Erik, once again, gave the bike a tug to straighten it and we continued. About 3km before our camp, the road had become quite slippery. Coming out of a corner my back end came around and I - by pure blind luck - spun the bike 180 degrees without going down. Erik applauded the pirouette and, as we pulled into camp, Erik commented that the afternoon ride was like watching a man wrestle a buffalo. This expedition is going to be a bit of a buffalo wrestle for the BRCK team. Having eight extra people who aren’t used to Africa, don’t understand our corporate culture, and who have their own priorities that don’t necessarily align with our own, will make this a truly unique trip. It will be great to share our beautiful home and to expose these professionals to the chaos of Africa. Even in the first day, it is obvious that this is going to be an eye opening trip for for the Good All Over team. 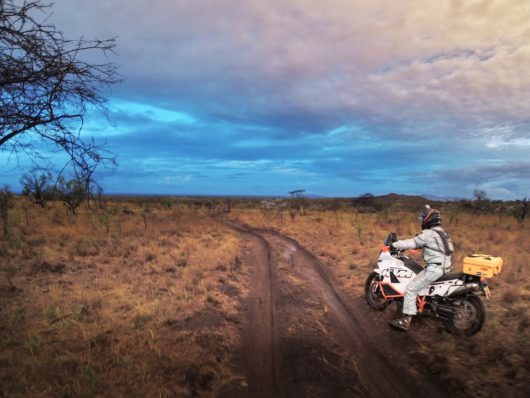 Philip wrestling his motorcycle in the mud The late afternoon rain in the Chyulu also brought us an exceptional rainbow. The light cast as the sun set was as stunning as I’ve ever seen. Everything bathed in the light took on a glow of special significance. Even the Maasai cattle - who generally look somewhat scruffy and pathetic - were picture perfect for a Swiss dairy poster. We were all chomping at the bit to stop and take pictures but the sun was setting, the ground was wet, and we still needed to setup camp. Plus, the film crew does not exactly stop and take pictures quickly. Chasing the rainbow of having a dry camp on our first night, with storm clouds and water columns all around us, seemed an impossible wish. With every turn we would align with another distant downpour and keep pushing. As with our first night in Malawi on Expedition South Africa, at the very last minute we turned into the last spot of clear sky. We arrived at camp as the last rays faded and by 9pm the tents were pitched, our bellies were full with Rinnie’s Famous Chili (a BRCK tradition), and we called it a night in our dry camp. Once again we had achieved the impossible in spite of the challenges around us. Moja is one of those ideas that is going to require the same level of good fortune and indeterminate persistence. The idea of giving internet away for free to customers that can’t afford to pay and still make a profitable business is another rainbow that is worth chasing. 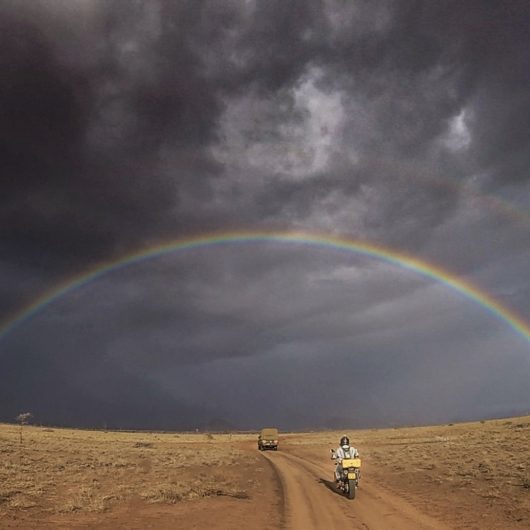 One response to “Wrestling Buffalo and Chasing Rainbows”